The LA Cup is a sports event that took place from 23rd November to 5th December, 2019 where more than 7000 attendees converged at the Little Angels’ premises for the duration of the event.

The LACM Student Council agree to provide “Co-Sponsor” title to IME Pay for the event. IME Pay’s logo was incorporated in all promotional materials for the event. IME Pay was provided 2 booth spaces for conversion purposes and another for promotion of IME Pay. The brand visibility was high as several banner were placed throughout the event venue.

How to Link Bank on IME Pay via Bank Branch 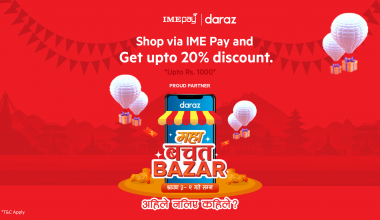 Read More
We were just celebrating our exciting new partnership with Daraz, the largest shopping platform in Nepal. Now, only…